We’ve all seen them. We’ve even heard them long before they appear. Idling in traffic waiting on the green light and suddenly a striking car catches your eye. The bold colour and unique exterior are hard to ignore and you wonder for a bit what it would be like to cruise down William Nicol in a car like that.

You can get your modest car to look and perform like a premium model through the magic of modifications.

Whether your modifications are purely for aesthetics or you want to increase your car’s performance for more driving pleasure, modifying your car isn’t as easy as the movies might have you believe. Getting a car that rivals a Fast & Furious ride can be expensive, time-consuming and even illegal. Here are a few considerations to keep in mind before planning that drive off into the sunset with your pimped-up ride.

1. What are the most popular car modifications?

There are three main categories of trendy car modifications, based on the goal of the change to the vehicle. The most popular ways drivers are modifying their cars involve:

From looks, to feel and the need for speed, the most common tweaks people generally make to their cars are:

Stars, stripes, flames and even graffiti are popular choices when drivers want to add a more cost-effective visual appeal to their wheels. However, aesthetic modifications extend beyond the car body and can include chrome tyre rims, grilles and so-called “halo” headlights.

Modifying your car in this way is the simplest because all these changes aren't permanent and only affect the way the car looks and not the way it performs. It’s a pretty harmless way to make tweaks to your car, but there’s no guarantee you won’t stop traffic with your bold design choices.

Car enhancements that have more to do with function than form mostly have to do with a vehicle’s suspension.

If you’re satisfied with your car’s general performance and don’t intend on increasing its machine power, you’re probably looking at making some functional car modifications, for practical reasons. Some reasons include lifting your vehicle’s suspension to navigate bumpy roads and rough terrain as a bakkie driver. This kind of enhancement elevates the vehicle to avoid any damage to its bottom. [N3]

Perhaps you want a sportier look and feel to your ride. A slight drop in suspension enables your car to have bigger and wider tyres while cruising comfortably - and safely.

Looks aren't everything, and drivers who have a need for speed and a desire for a powerful engine know this. Car modifications that improve a vehicle’s engine power, speed and braking abilities are considered performance-based.

Turbochargers and nitrous oxide are popular ways to alter your car’s speed limit, but they’re not so popular with the law. These performance modifications are likely to be illegal because of the threat they pose to the safety of the driver and other users on the road.

The idea behind modifying your car for performance purposes is to improve the driver experience or simply increase your car’s capabilities in your chosen environment.

2. Benefits and challenges of modifying your car

The concept of modification isn’t just for illegal street car racing like in the movies. Some cars can benefit greatly from a few tweaks to various parts.

For example, if you alter your car’s speed capacity, your car will have more power, which you could either use with restraint and experience fuel economy benefits or choose to drag race, putting you and other road users at risk.

Fitting larger rims and better tyres could either improve your car’s roadholding ability and reduce road noise or be a road hazard if they are not compatible with your vehicle, ill-fitting or don’t have the correct speed rating.

Car modifications that fall outside the manufacturer’s approved accessory installation can also affect the warranty of your car. When the same alterations also contravene the Road Traffic Act, the car can be deemed illegal for use on a public road. This can result in your car being discontinued from service, and to continue driving it, you will need to restore it to its original condition and present it for a retest at an approved vehicle testing station.

According to Forensic Road Transport and Risk Expert Stanley Bezuidenhout, there should be no issues with modifying your car with after-market accessories or performing upgrades on a vehicle if you:

On the other hand, says Bezuidenhout, there are certain modifications that compromise vehicles and could deem your car unroadworthy:

Remember to keep in mind when modifying your car the impact of the enhancements on fuel consumption. Cars are built a standard way for a reason, and they’ve gone through tests to get the most economic performance for that particular make. Something as small as the wrong set of tyres could increase your fuel costs

3. Which car modifications are considered valid?

To be considered valid, modifications to your car need to be fitted with parts and accessories approved by the car manufacturer so you don’t lose the vehicle’s warranty.

Tampering with the engine performance, suspension, wheels, and brakes of a vehicle go outside the approved parameters, making the car’s dynamic performance a safety hazard because that specific vehicle wasn’t designed with high-performance driving in mind, especially on a public road.

“Such highly modified vehicles can only be restricted for use on racing tracks,” says Bezuidenhout. “Illegal street racing with vehicles modified to boost the performance of the vehicle has become a significant concern to all in road traffic enforcement and a threat to all road users.”

4. Which modifications are a threat to road safety?

“Simply put, alterations and modifications can be described as bringing about changes to the original vehicle parameter standards with a view, largely of enhancing a vehicle’s performance in fuel consumption, load capacity, cosmetic trim, 0 - 100km/h or top speed runs,” says Bezuidenhout. “Where these modifications do not comply with the requirements of the Road Traffic Act, they will be deemed illegal.”

So, what car modifications are considered a threat to the law and safety of other road users?

5. What is your modification budget?

One thing about modifying your car - it won’t be cheap.

Buying a car in itself is an expensive exercise, regardless of whether you’re buying it pre-owned or brand new, financed or cash. If you’ve already put down a deposit on a new car, you probably don’t have that much more to spend on modifying it to your satisfaction.

Not to mention covering the hidden costs of car modification and maintaining your new enhancements. A modified engine may need you to switch to premium fuel, costing you more in the long run with every visit to the petrol pump. A specialised paint job can make a scratch or dent feel like more than a minor incident.

It’s already expensive driving an ordinary, off-the-rack vehicle. Throw in a few modifications and you’re looking at big short- and long-term costs. You need to decide if digging deeper into your pockets for nice-to-have features is a necessity.

Long-term costs of modifying your car

Perhaps consider seeking out modified cars for sale matching your desired features. Platforms like Carzuka offer a wide range of cars to choose from. It’s not guaranteed you’ll find exactly what you’re looking for, but it may work out cheaper than modifying an ordinary car from scratch.

You may have to make peace with the fact that your new pimped up ride may have been put through quite a lot already. Have a trusted contact in the auto industry run a check on the car’s history to ensure you’re not buying a car that will give you future problems because of a sketchy past.

Another consideration to keep in mind is that all these modifications may not increase the car's value. The car’s book value remains the same, despite how much you spend on modifying it. So, in the long run, if you intend on selling the car one day, be prepared to lose everything you've put into it.

Your modified car is just as special to us as it is to you. Let us help you protect it with our world-class vehicle tracking service. About to drive through a dodgy neighbourhood or park at the mall for an errand? We’ve got you. Contact Cartrack today and let us help you stay safe on the road. 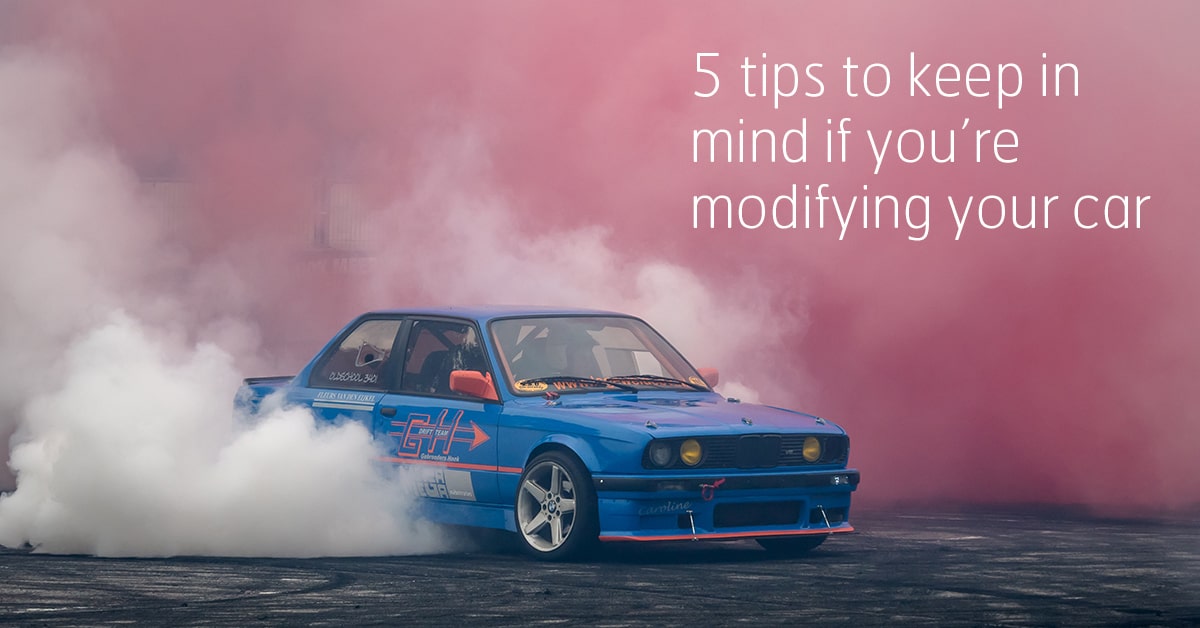 From the exterior to the interior and everything in between, modifications may not get your car looking like a Lamborghini, but you’ll look and feel like you’re driving a whole new vehicle.